8 takeaways from FDA’s conference on CBD and gender

CBD businesses looking for regulatory clues from U.S. food and drug regulators were watching closely in mid-November, when the U.S. Food and Drug Administration reassured the industry and the public that the science of CBD and other cannabinoids has become a priority.

“We are working very hard on this. We understand its importance for public health,” said Dr. Douglas Throckmorton, FDA’s deputy director for regulatory programs, to open the recent daylong research conference on cannabinoids and gender.

But the FDA gave little indication that those regulations will be coming soon. Instead, researchers discussing data on how cannabis compounds affect women and men differently repeatedly identified research gaps.

Much of the data that was presented during the conference showed that there are open questions about CBD that will take time to sort out, said Jonathan Havens, head of the cannabis practice group at the Saul Ewing Arnstein & Lehr law firm in Baltimore and Washington DC. 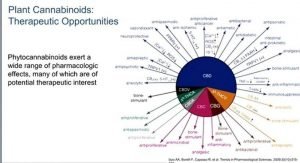 CBD is appealing to many because it doesn’t provide the high from THC, so people are curious, said Shari Berman, owner of Canna Healing Consulting in Boston.

Berman told the FDA that she personally pursued the use of cannabis during bouts with cancer, but didn’t receive help from her doctors even after medical marijuana was legalized in her home state of Massachusetts.

“There is less stigma associated with using hemp CBD than cannabis,” said Berman, who now advocates for other patients.

Most consumers worry about a lack of regulation because of mislabeled and potentially unsafe products, Berman said. Right now, “patients are driving this, not doctors,” she said. Most product labels direct consumers to consult with their doctors, but medical professionals are not trained or allowed to advise patients on how to use CBD.

“Patients want to know how to use (CBD) and want to be able to have conversations with their doctors, but most of the time, doctors shut people down and it makes people nervous about using it,” Berman said.

The way cannabis is scheduled currently inhibits research, Berman said. She called for cannabis training in medical schools and for FDA to involve consumers in the CBD Working Group.

FDA is looking at research and data from all cannabinoids, not just CBD. Much of the data presented during the cannabinoids, sex and gender conference was in regard to THC’s effects on anxiety, pain, pregnancy and women’s health.

The agency says there are research gaps on minor cannabinoids as well as other non-cannabinoid molecules such as terpenes.

“The focus of research for many years has been on THC, and it’s left significant gaps in understanding the properties of the well over 100 cannabinoids and 120 terpenes within the cannabis plant. Many may have important therapeutic benefits,” said David Shurtleff, deputy director of the National Institute for Health’s National Center for Complementary and Integrative Health.

He said that phytocannabinoids “exert a wide range of pharmacologic effects” that are of therapeutic interest.

The FDA is looking at health effects of both marijuana and federally legal hemp, and has separate working groups focused on each.

Preliminary research results show that CBD is more effective in lowering anxiety than THC and shows more pronounced reduction in female subjects than in male subjects, according to Cinnamon Bidwell, director of the Center for Research and Education Addressing Cannabis and Health at the University of Colorado, Boulder.

Bidwell said women tend to be more anxious than men and respond differently to cannabis. Cannabis products were sourced from Colorado dispensaries and patients were tested both before and after cannabis use.

Bidwell said data collection for the study is ongoing through 2021, and she is looking to expand her research to include a more diverse patient sample.

According to Dr. Daniel Clauw of the University of Michigan, men and women respond differently to cannabinoids when they are used for pain. Men have a “lower amplifier setting” for pain, Clauw said, while women have 1.5-2 times more chronic pain than men, which originates more from the central nervous system, on average.

CBD, in particular, has peripheral anti-inflammatory effects that may be responsible for pain relief, and might be more effective for nociceptive pain — originating from the periphery such as acute pain, osteoarthritis and rheumatoid arthritis — as well as centralized or nociplastic pain, which originates from the central nervous system.

In studies of patients dealing with cannabis use disorder, Yasmin Hurd, director of the Addiction Institute at Mount Sinai, found that using CBD suggests reduction of cannabis, opioid and alcohol use and cravings and anxiety in heroin addicts — but the evidence is still weak given the small sample sizes.

In relation to psychosis, CBD and THC have been shown to have opposite effects on regional brain activation across a variety of cognitive tasks in healthy individuals.

When it comes to pregnant and nursing women, a lot more is known about the effects of using THC during pregnancy, including craniofacial malformations in mice similar to those caused by fetal alcohol syndrome.

According to Scott Parnell, assistant professor of cell biology and physiology at the University of North Carolina, Chapel Hill, THC and CBD, and particularly synthetic cannabinoids, disturb embryo and fetal development.

He said more epidemiological studies in humans are needed to learn the effects of cannabinoids during other developmental stages, long-term use effects during pregnancy and behavior effects.

Overall, there was no specific data presented on the use of hemp-derived CBD during pregnancy and lactation.

Any data that currently exists for CBD isolate is in regard to use of Epidiolex on animals at high levels, but that would be different compared to doses given to humans and lower-dose, over-the-counter products, according to Dr. Mark Zakowski, anesthesiologist at Cedars-Sinai Medical Center in Los Angeles.

In terms of hemp-derived CBD-specific use, the conclusions are far from solid and unless it’s a clear therapeutic use, pregnant and lactating women are likely not getting any benefit from CBD, so the default is “don’t use it,” said dr. Nathaniel DeNicola, an environmental health expert with the American College of Obstetricians and Gynecologists.

Traditionally, scientific studies have focused on male physiology, and there continues to be a need to remove barriers for women to get into studies, according to Betty Jo Salmeron, staff clinician for NIH’s National Institute on Drug Abuse.

“NIH has ratcheted up the enforcement of studying sex as a biological variable because women were not included in studies,” Salmerson said.

It’s imperative, she said, that women are included at all stages across the lifespan, so researchers can understand how the female physiology responds to anything that is being studied. Salmerson said the NIH Office of Women in Research has resources available to researchers interested in studying women’s responses.

An overarching theme of the conference was the need for more research.

Government agencies are funding numerous projects focused on cannabidiol, THC and minor cannabinoids, seeking to understand how they work when used together and with conventional drugs.

The FDA’s National Center for Toxicological Research is also studying CBD in pre- and post-natal development, an ongoing, 2-3 year study looking at the neurobehavioral and neurochemical toxicity of purified CBD.

Hempdrate is FDA compliant and adheres to the best standard practices such as 3rd party lab testing, registered FDA facility, cGMP certified and product transparency by adding QR codes for consumers to verify the quality and potency of our CBD product via the Certificate of Analysis

Top 3 Benefits of Immune Zinger a Tumeric and Ginger Drink

Top 3 Benefits of Immune Zinger a Tumeric and Ginger Drink Hempdrate.com offers a healthy-tasting Tumeric & Ginger drink, including Vitamin C, Zinc, Hemp, and Prebiotic Fiber.  Benefit 1: Properties that may help with sickness and...

END_OF_DOCUMENT_TOKEN_TO_BE_REPLACED

Nano Hydrate launches Delta 8 Water Soluble Tinctures under its flagship brand Delta 8 THC is one of the many cannabinoids found in the hemp plant & has a lower psychoactive potency than its more...

END_OF_DOCUMENT_TOKEN_TO_BE_REPLACED

Find comfort with this CBD-infused Sweet Tea recipe Sweet tea is a staple for family gatherings and meals. If you are thirsty, you can rest assure, a big glass of sweet tea will be on...

END_OF_DOCUMENT_TOKEN_TO_BE_REPLACED

Soothe Your Pain & Anxiety with this Strawberry Pineapple Smoothie

END_OF_DOCUMENT_TOKEN_TO_BE_REPLACED

CBD Rose Water Mist is a new refreshing facial toner Ethereal vibes for the modern-day goddess In the never-ending sea of cosmetics and facial products which far-fetched claims it’s hard to know which products to trust....

END_OF_DOCUMENT_TOKEN_TO_BE_REPLACED

2021 Top 6 Benefits of Delta 8 Plus+ Gummies   Delta 8 is Plus+ Gummies are a perfect touch for relief after a long day. Let’s be truthful. Work doesn’t always end after the workday, but...

END_OF_DOCUMENT_TOKEN_TO_BE_REPLACED

2021 Top 5 Benefits of Water Soluble CBD Tinctures   Everyone has heard the phrase that water and oil do not mix. See the 2021 This is also the case with Cannabidiol, also known as CBD...

END_OF_DOCUMENT_TOKEN_TO_BE_REPLACED

Editor’s Notebook: Why I changed my mind about delta-8 THC for wellness